You can’t help but smile when you hear people laughing. A neuroscientist at University College London, Sophie Scott, monitored the brains of people while playing laughing sounds. She found that the premotor cortical region of the brain (which prepares facial muscles to move) was activated.

Laughter is the best medicine. Horse jokes, bone puns, or even robot jokes maybe something out-of-this-world jokes will cheer up your day.

Here is the challenge for you today. Try not to laugh with our list of the best space jokes and puns – it’s almost impossible. 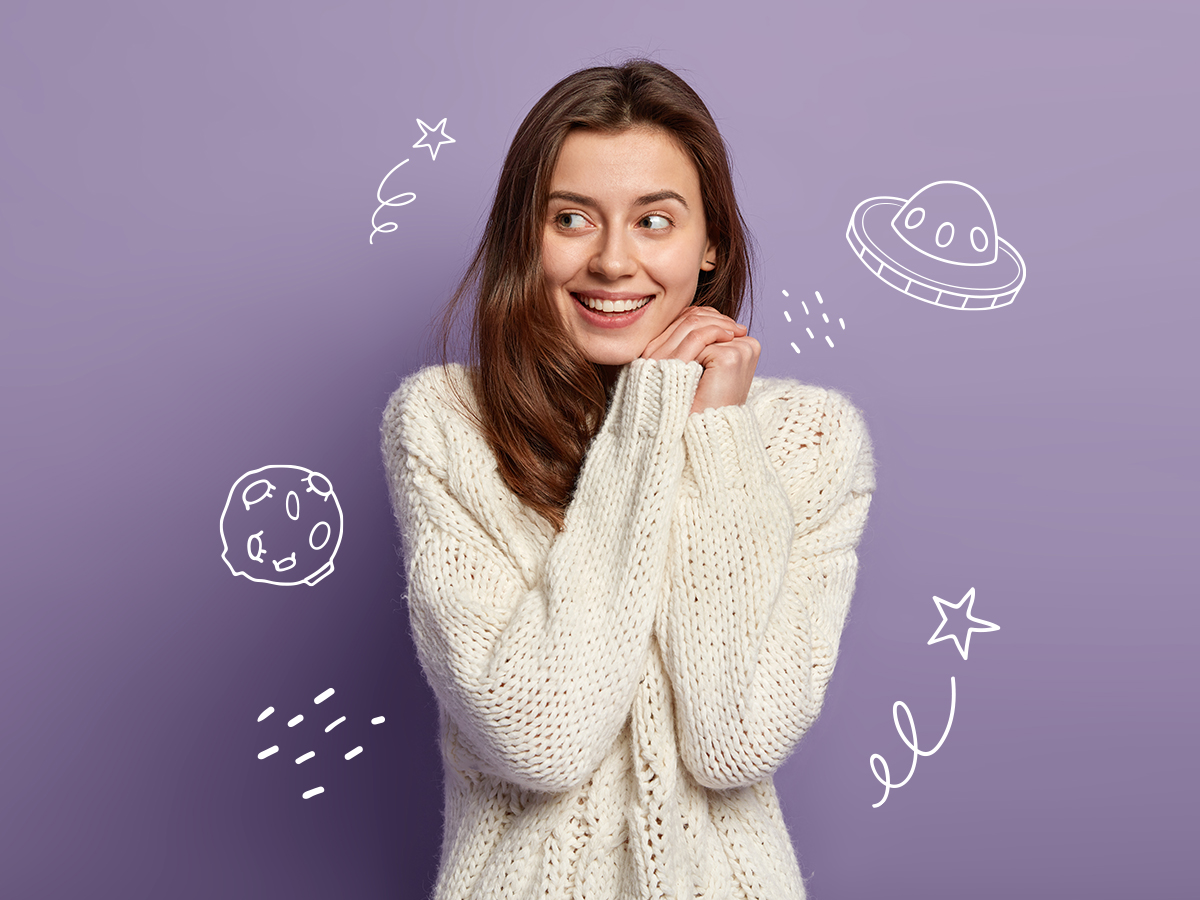 It was a cat astro fee.

2. Why did Mickey Mouse go to outer space?

3. Despite space being a vacuum…

4. I am throwing a party in space.

Can you help me planet?

5. Why did the Americans win the space race?

Because the Soviets were Stalin.

Because it already had a million degrees!

7. How do space cowboys wrangle their cattle?

8. Where do keyboards go to have dinner?

9. Yesterday, I was talking to an alien from space. It turns out they eat radioactive materials.

I asked it what its favorite meal was. It told me fission chips.

10. Why did the astronaut break up with her boyfriend?

Because she needed some space.

12. Why can’t you tell anyone about space?

Because it’s too out of this world!

13. How did the space teddy bear cross the road?

14. Why couldn’t the astronaut put the helmet on her head?

Because she didn’t have enough space. 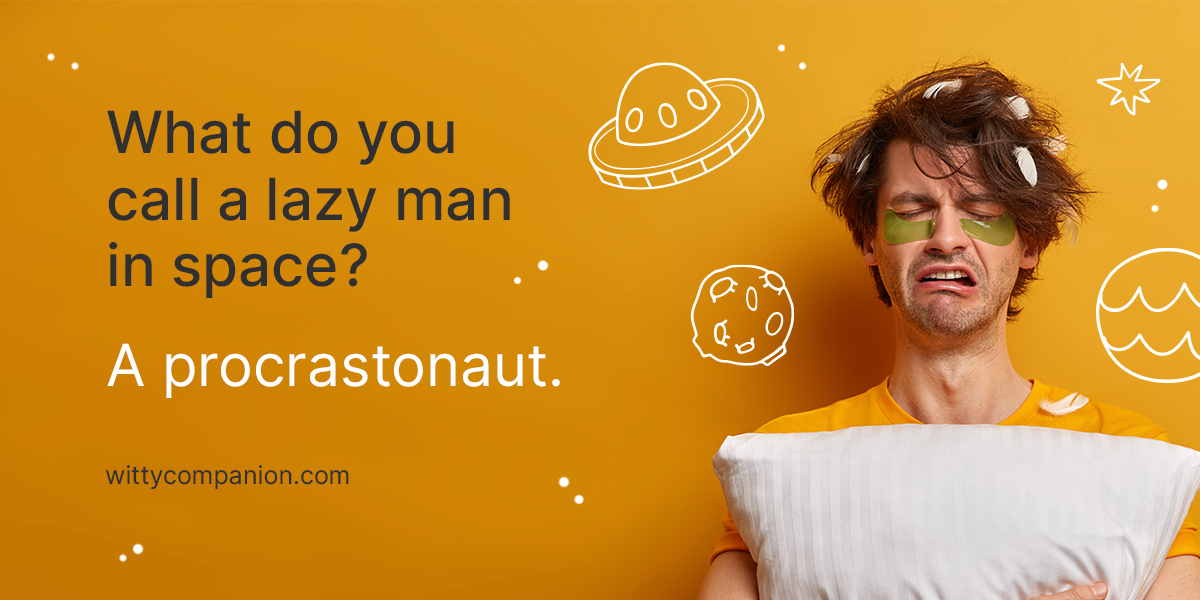 5. Sherlock Holmes and John Watson are camping on a case they are investigating. After putting up the tent, having a good dinner, and drinking a bottle of wine, they go to sleep.

In the middle of the night, Holmes wakes up and nudges his faithful friend.

“Watson, look up at the sky and tell me what you see,” Holmes says, shivering.

“I see millions and millions of stars, Holmes,” replies Watson.

“And what do you deduce from that?”

Watson ponders for a minute.

“Well, it tells me that there are millions of galaxies and potentially billions of planets. Somewhere in the universe, with so many billions of stars similar to the sun, there is a high probability that some of these stars have Earth-like planets. And assuming the Earth is typical, some may have developed intelligent life. It means that humanity may not be alone in this vast cosmos. What did you deduce, Holmes?”

Holmes is silent for a moment before he replies.

“Quite,” he says. “Though my more immediate concern is the fact that, clearly, someone has stolen our tent.”

16. What is an astronaut’s favorite chocolate?

17. Why will space be a popular tourist spot?

The view is breathtaking and will leave you speechless.

18. Where would an astronaut park his spaceship?

20. What was the first animal in space?

The cow that jumped over the moon.

21. If athletes get athlete’s foot, what do astronauts get?

22. What does an astronaut call his ex from space?

23. Who in the solar system has the loosest change?

The moon because it keeps changing quarters.

24. Why did the people not like the restaurant on the moon?

Because there was no atmosphere.

25. What did the doctor say to the rocket ship?

“Time to get your booster shot!”

26. What do you call a comet wrapped in bacon?

27. What do you get when you cross a lamb and a rocket?

28. What did the alien say to the garden?

“Take me to your weeder!”

29. Three people were all bragging about their country. The first person says, “We were the first in space!”

And the second responds, “Well, we were first on the moon! Beat that!”

So the third person says, “Well, that’s nothing. Me and my crew are going to the sun!”

“How are you gonna do that?” said the other two.

30. Why aren’t astronauts hungry when they get to space?

They had a big launch. 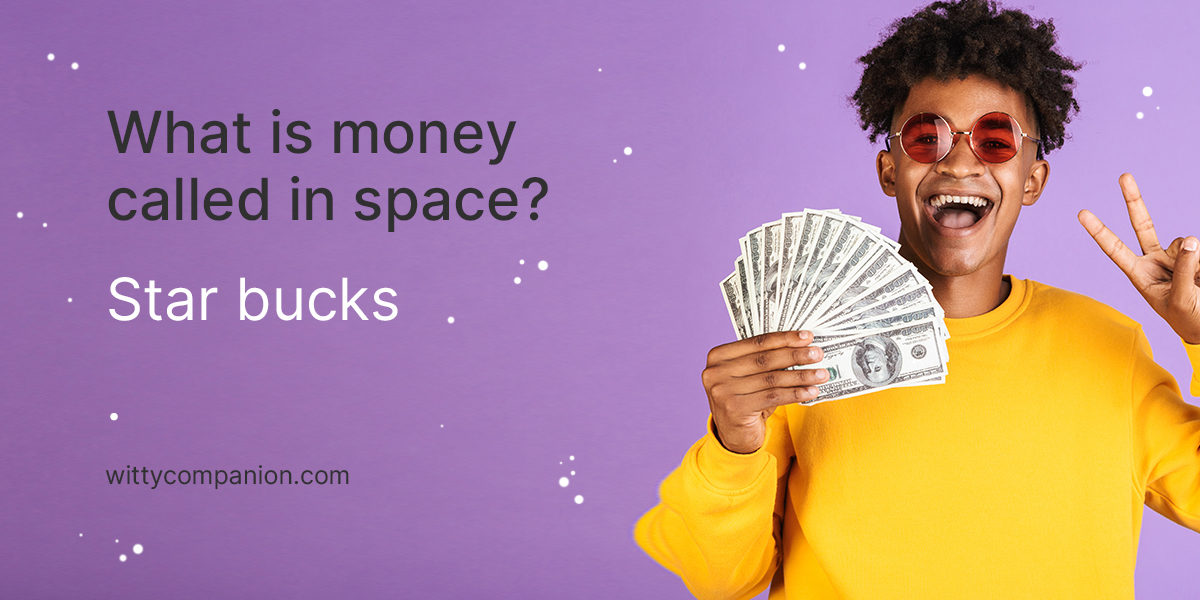 31. Why did Venus have to get an air conditioner?

Because Mercury moved in.

To visit the milky way.

33. What did Neil Armstrong say when no one laughed at his moon jokes?

“I guess you had to be there.”

Because they taste funny!

35. What dance do all astronauts know?

36. How do you know when the moon has enough to eat?

37. How do you know when the moon is going broke?

When it’s down to its last quarter.

39. Which is closer, Florida or the moon?

The moon. You can’t see Florida from here.

41. Why couldn’t the astronaut book a room on the moon?

Because it was full, of course!

42. What kind of music do planets sing?

43. Why do Saturn’s two moons swap orbit every four years?

44. Why did the cow go into the spaceship?

It wanted to see the mooooooon.

45. How did the alien break its phone?

46. Why did the rocket scientist stop working on a project?

That’s why they have a bad werewolf problem.

48. Saturn’s name is the best in our solar system.

It has a nice ring to it.

49. Why was Jupiter banned from competing in the planetary boxing championship?

He was taking asteroids.

50. Why haven’t aliens come to our solar system yet?

They read the reviews: one star. 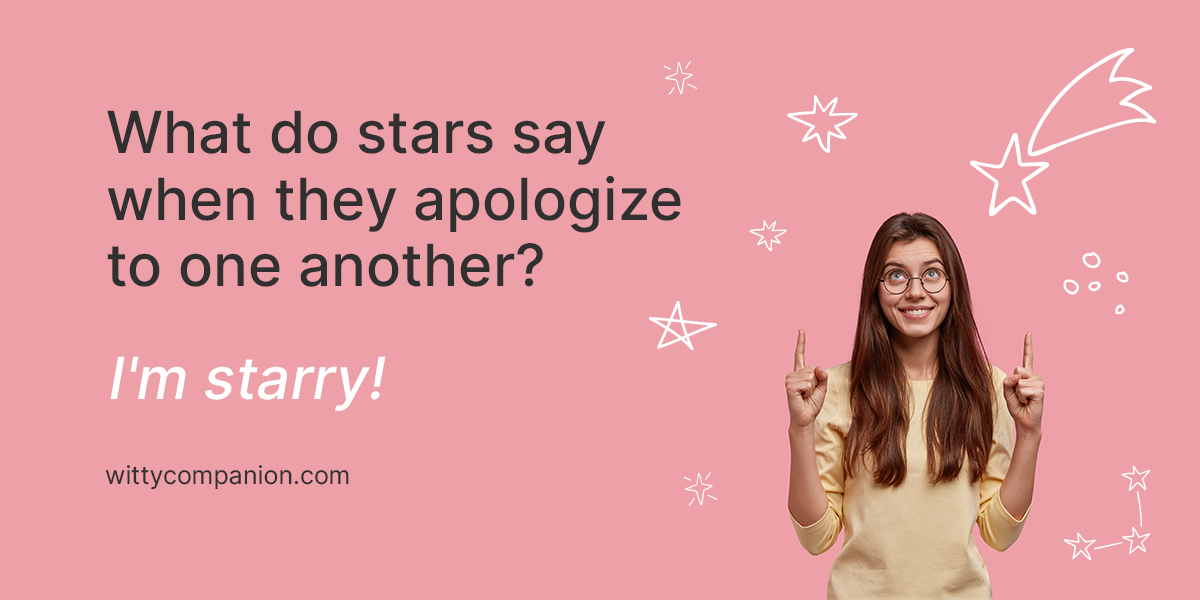 51. What do you call croissants in space?

52. How does our solar system hold up its pants?

With an asteroid belt.

53. What is Saturn’s favorite movie?

Lord of the Rings.

54. When our solar system was formed, the sun was in charge.

So, the planets started a revolution.

55. What do you get if you send an anime fan to one of Saturn’s moons?

56. I’m reading a book about anti-gravity.

It’s impossible to put down.

It’s a big waist of space.

It was too Sirius.

Because the Milky Way would go bad.

60. What should you do if you see a green alien?

62. What do aliens on the metric system say?

“Take me to your liter.”

63. What is money called in space?

64. What did the alien say when he was out of room?

65. What do stars say when they apologize to one another?

“Give me a ring sometime.”

67. What do you say if you want to start a fight in space?

Solar you going to think of a better joke?

Did we do justice to space jokes and puns?

We would love to hear your favorite space jokes as well.

Feel free to drop them below!