Are you an avid bird watcher looking for the best bird jokes? Perhaps you love to feed the birds in the park with your kid?

Well, no matter what you do, we are sure that birds are fascinating creatures worth writing about. You will have so much fun with our list of 55+ bird jokes. 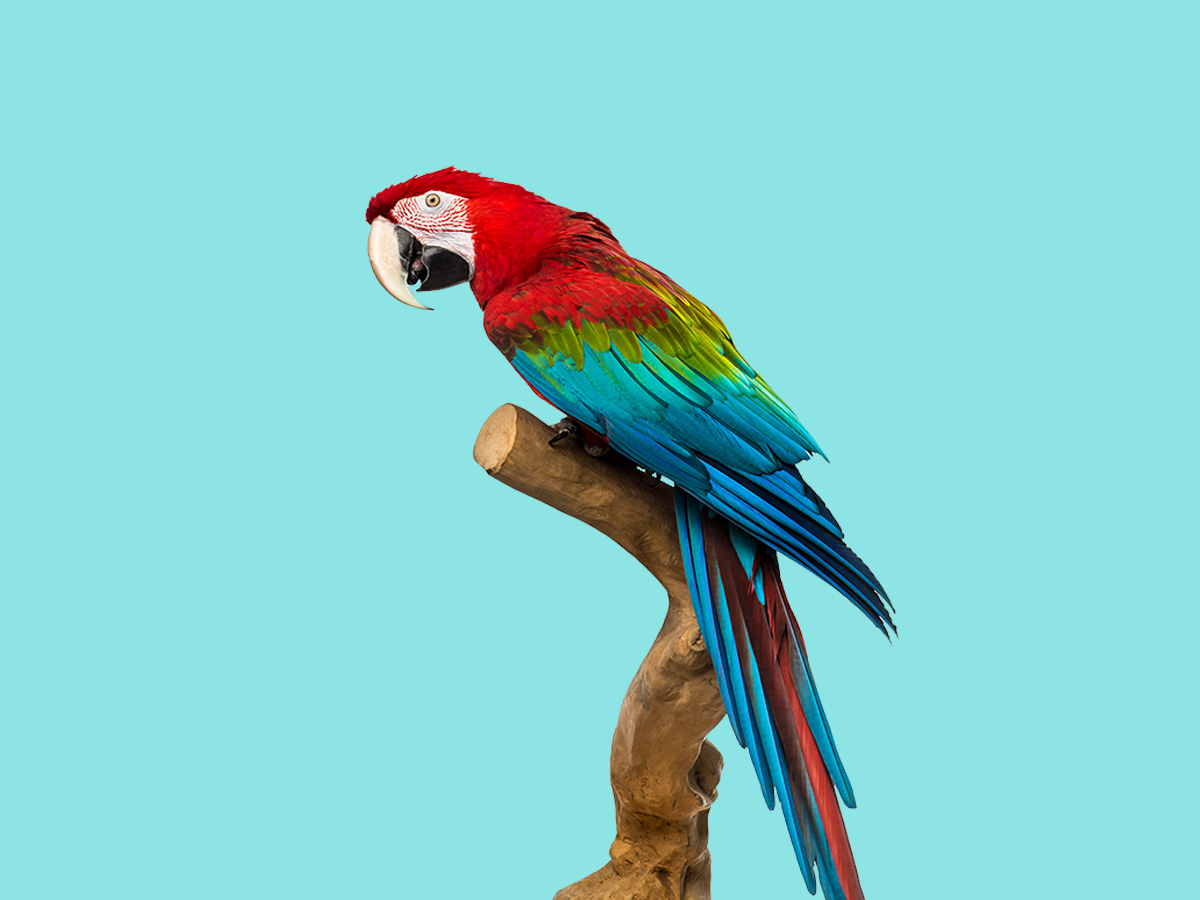 1. Mozart sold all his chickens. He said they kept yelling ‘Bach Bach’ all the time.

2. A bird went to the grocery store to buy a bar of soap. It came out angry because it couldn’t find a ‘Dove’ there.

3. One of the bird movies got nominated for the Oscars. It was called ‘The Lord of the Wings.’

4. A proper tweetment is the only solution for a sick bird’s speedy recovery.

5. The birds like their soup with some extra crowtons.

6. A velcrow helps keep the crows in a flock.

7. The crowbar made breaking into the house such an easy task for the birds.

8. Being a flight attendant would be the dream job for eagles and owl jays.

9. The crows are fond of the telephone wires because they always look forward to making a long-distance caw.

11. The duck was so sad that the doctor asked it to read about bird puns and jokes. Once the duck started reading them, it really quacked him up.

12. Don’t worry if a bird has a bad wing; it can use a sparrowchute.

13. The ducks love to eat quackers with their soups.

14. Even during the hardest of times, the warrior bird says, “Owl not give up.”

15. The parrot has now turned into a popular jailbird.

16. Every bird loves the chicken dance because it is poultry in motion.

17. There’s an owl who knows magic tricks. His name is Hoodini.

18. If birds were to run the Church, the Cardinals would take the lead out there.

19. The smartest bird of prey award surely goes to the know-it owl.

20. If you happen to get a crate of ducks, you will be lucky to call them a box of quackers.

22. Make sure you keep your clothes safe while in the bathtub as there are high chances of the robber ducky looting you.

23. Cross a duck with a firecracker, and you will surely enjoy the firequacker.

24. The duck republic has a level duck to lead them. He’s called a wise quacker.

25. If birds could speak a different language, geese would be fluent in the Portugeese language.

26. The eagle was very sad and was going in a downward spiral.

27. If there were a movie to be made on a green woodpecker, it would be named ‘Woody, The Wood Pickle’.

28. The owl never studies for his tests. He prefers to just wing it. 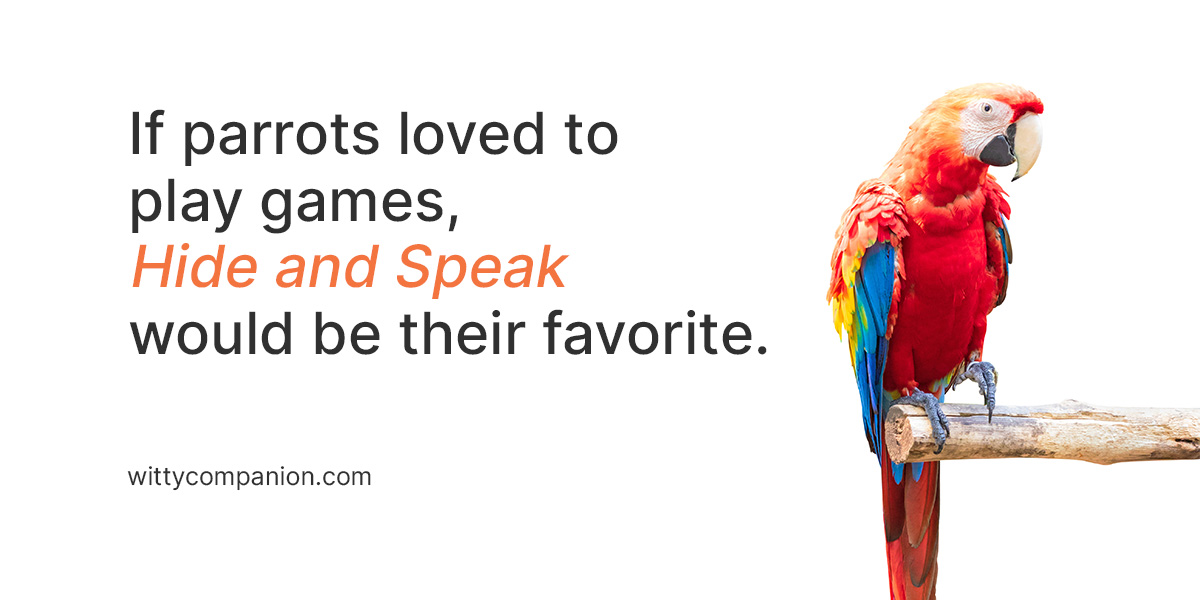 29. If you are on the waters and a bird ends up showing aikido skills, its name sure will be Steven Seagull.

30. The woodpecker found a really firm bark. It was so im-peck-able.

31. It was so cold that the eagle was forced to say ‘Birrrrrrd.’

32. A bunch of chickens was playing hide-and-seek. It turned out to be fowl play.

33. One needs to be careful with the robber ducks in the soap aisle. They steal half the things.

34. A canary flew into the pasty dish and made it a Tweetie pie.

35. Owl loves to read books, and the favorite genre that it prefers is the ‘hoot-dunits.’

36. Hummingbirds love to hum because they don’t know any other words.

38. If a chicken was born in the 1960s, it belonged to the funky chicken generation.

39. The cranes are considered the strongest of birds. They can easily carry the most weight.

40. I found a sad bird in my window today. Seems like a bluebird to me.

41. If you are looking to buy a bird in the grocery stores, you should be sure to check out the kiwis.

42. The chickens love to stay healthy and strong. Hence, they egg-cersize every day. 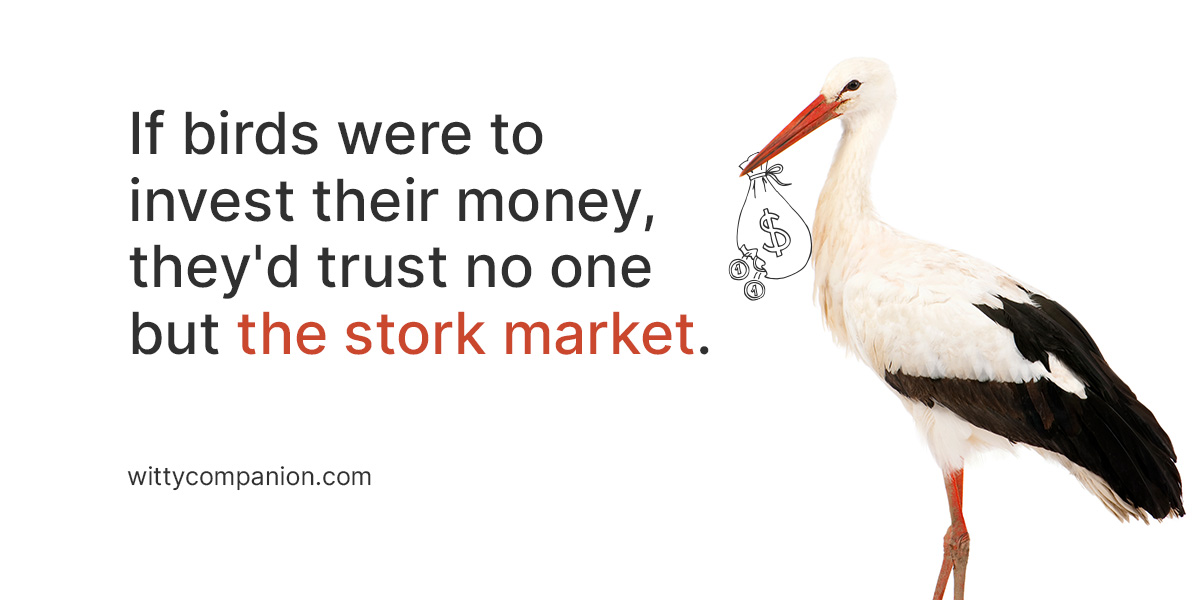 43. Consider having swallows for dinner; they will make the meal easily digestible.

44. The little bird got in trouble at school because it was found tweeting on a test.

45. Puffins are so cute but are always out of breath when they fly.

46. There was this bird that was quite rude to the crow today. This was because it was a mockingbird.

48. A few birds spend all their time on their knees, praying to God. The bird community calls them ‘The Birds of Prey.’

49. If parrots loved to play games, ‘Hide and Speak’ would be their favorite one.

50. All the birds were getting ready for the royal ceremony. They had packed their bags to leave for Duckingham Palace.

51. If you need directions, the terns will show you the right path.

52. An exotic parrot teased a toucan bird in the rainforest. The toucan replied, “Toucan play at that game.”

53. Macaws wanted to play with each other and said to another breed, “Toucan play at that game.”

54. If you ever get a chance to attend a winter owl party, you should do it! The parties are a hoot!

56. If birds were to invest their money, they’d trust no one but the stork market.

57. The only good thing about Thanksgiving is turkey for an owl!

58. The best time to buy a bird is when it’s cheep – a piece of advice to make your heart fly, always!

We would love to hear your favorite bird jokes.

Share them with us in the comments below, and we shall see you in the next post!